The biggest of bees.

There are almost 20,000 known species of bees, and many more that remain undescribed. Bees can be found everywhere that flowering plants occur, and on every continent except Antarctica. Australia has over 1,500 species of native bees, in a multitude of forms and displaying huge variation in ‘beehaviour’.

There are a couple of contenders for the smallest bee in the world. Perdita minima, a solitary species from the southwestern United States, measures less than 2mm in length. However, this may be eclipsed by a number of tiny Australian native bees from Cape York Peninsula. Initially described in 1968, the genus Quasihesma contains at least eight species also typically less than 2mm long that swarm around the flowers of species of Melaleuca, Eucalyptus and Eugenia.

The biggest bee of all is Wallace’s Giant Bee (Magachile pluto), an Indonesian species of resin bee (a leafcutter bee that uses resin in the construction of its nest). It was discovered by the famous naturalist Alfred Russel Wallace in 1858, but was thought to be extinct until its rediscovery in 1981 on some islands in the Moluccas. Local residents were unaware of the bees’ existence, as they build their nests inside active termite mounds. Females are larger than males, and can grow up to 3.9cm long, with a wingspan extending to 6.3cm.

Dawson’s Burrowing Bee (Amegilla dawsoni), a long-tongued bee from Western Australia, is one of Australia’s largest species, with a length of up to 2.3cm and a wingspan of 4.5cm. These bees feed only on four genera of plants found in the Western Australian deserts. Although solitary in nature, thousands of females aggregate each year to dig their nests around arid claypans. With the exception of part of their faces, both sexes are covered in dense fur; males are brown, and females brown and white. Males are polymorphic, and females can control whether their male offspring are large (‘major’) or small (‘minor’) by differential provisioning of the larvae. This results in fascinating mating behaviour, in which the major males aggressively patrol emergence areas, competing fiercely for females, while minor males (which make up the majority) occupy the perimeters, waiting for the few females which may escape without mating.

The two species of Australian great carpenter bees (Xylocopa spp.) are also strong contenders for the title of our largest species. Males are slightly larger than females and are reputed to reach 2.6cm in length. Luckily, they do not sting! Most of the male’s body is covered in golden or olive fur, whilst the female has a glossy black abdomen and bright yellow fur on the thorax, with a small black spot in the centre.

There are a total of eight Australian species of carpenter bees, so called because they carve their nests into decaying timber or pithy stems using their powerful mandibles. Carpenter bees are widespread in tropical and subtropical regions; great carpenter bees are found in the Northern Territory, Queensland, and parts of New South Wales and Western Australia. They exist in a range of habitats, including urban areas. Female great carpenter bees are responsible for creating the nests and collecting pollen to feed their young. Males are rarely seen, as they normally keep to territories high in the canopy, attracting females by the release of pheromones.

Carpenter bees are also unusual in that, along with many bumblebees, they employ a technique called ‘buzz pollination’ or ‘sonication’ to release pollen held firmly by the anthers of flowers. This involves the bee holding on to the flower whilst rapidly vibrating its flight muscles to shake loose the pollen. Sonication is the most efficient form of pollination, and is important in the propagation of native wildflowers including species in the genera Hibbertia and Dianella, as well as several food crops like tomatoes, capsicums and blueberries. Research is being conducted into the potential of carpenter bees for commercial pollination.

For troublesome infestations of bees and wasps, it is always best to seek the advice of a professional beekeeper or apiarist. In Melbourne, expert assistance is normally available within 24 hours. 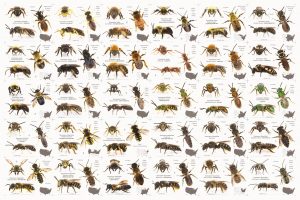 The Biggest of Bees
Tagged on: bees