Bee and wasp stings – some facts.

Bee stings can be painful, but the good news is that they cause very few fatalities. In fact, you are nearly twice as likely to be killed by a shark or lightning strike than by bee stings. Provided you do not have an allergy to the venom, the average adult can safely tolerate at least 20 stings per kilogram of body weight, which in most cases equates to a total of at least 1,000 stings.

Some species of bees – including the Australian native honey bees, of which there are about 10 species – are simply ‘stingless’. Many others are too small to bother humans. The sting is actually a modified ovipositor, and under certain circumstances, can be used by worker bees to lay eggs. Male bees, or drones, are therefore also incapable of stinging. Bumblebees and solitary bees are generally very docile, and stings are rare. In Australia, the vast majority of stings are due to introduced European or Western Honey Bees (Apis mellifera) and European or German Wasps (Vespula germanica), both of which are social insects that will vigorously defend their nests if provoked. Wasps are predators and tend to be naturally more aggressive than bees; their stings are often more painful.

Honey bees are unique in having a strongly-barbed sting. If the skin of the victim is sufficiently thick, such as a mammal’s, this is unable to be dislodged. When the bee attempts to flee, the sting is ripped from its body, along with a substantial part of the abdomen, including nerves, muscles and digestive tract. The bee is doomed to die, but muscles attached to the sting continue to drive it into the skin and pump out venom.

Many other bees and wasps have small barbs, or smooth stingers, and can therefore sting mammals repeatedly. Queen honey bees also possess a smooth sting, however they rarely leave the hive, and this is used only against rival queens.

Apitoxin, or bee venom, is a bitter, colourless liquid that is quite different to that of other stinging insects, and contains different toxins to that of wasps, although the effects are similar. It is possible to be allergic to one type of sting and not another. Wasp venom incorporates enzymes that break down cell membranes, in addition to neurotransmitters, which fire nerve impulses. Both wasp and bee venom contain hyaluronidase, which dilates the capillaries and helps to spread inflammation, together with substances that trigger the release of histamine, producing an acute allergic response. The main component of bee venom is the toxin melattin, which is responsible for causing pain in vertebrates and also causes inflammation and acts as an anti-coagulant. Apitoxin also includes chemicals that increase pulse rate, stop bleeding, degrade cellular membranes and decrease blood pressure, as well as anti-inflammatory agents. Both wasp and bee venom may contain pheromones that will prompt others of their kind to join the attack. Honey bees inject a relatively large amount of venom, sometimes considerably more than 50 micrograms. Wasps typically inject up to 15 micrograms, but of course, can do so repeatedly.

In what has become known as apitherapy, bee venom has been used to treat people suffering from rheumatoid arthritis, neuralgia, multiple sclerosis, tendonitis and various muscle conditions, as well to desensitise those allergic to bee stings.

Apitoxin has also been instrumental in the manufacture of an anti-ageing cream that is said to combat the effects of menopause, in particular, by improving the texture of skin and reducing lines and wrinkles. Apparently favoured by members of the British Royal Family, it is claimed to work by increasing blood flow and stimulating the production of collagen and elastin, whilst also relaxing the muscles.

If you have a bee or wasp problem in Melbourne, avoid the risk of being unnecessarily stung by contacting a professional beekeeper, or apiarist. 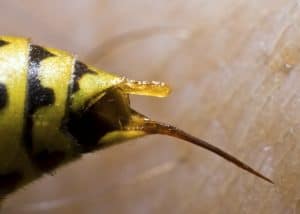 Bee and wasp stings – some facts.
Tagged on: stings