Varroa mites, also known simply as Varroa or bee mites, are tiny external parasites of honey bees. They are oval-shaped, with eight legs. Females are reddish-brown and 1-1.8mm long, whereas males are yellowish-white, smaller and somewhat rounder, being 0.75-0.98mm in length. The mites feed upon the ‘blood’ or hemolymph of the bees, and in the process transmit diseases and viruses such as the deformed wing virus (DWV). Varroa mites are obligate parasites of honey bees and cannot survive for long if deprived of their hosts; this forms the basis of some control methods.

The mites reproduce on a ten-day cycle which commences when an adult, mated female enters the larval cell of a honey bee. Once the cell is capped, the female mite lays her eggs, which usually consist of several females and one male (from an unfertilised egg). The young mites feed upon the bee larva and emerge from the cell with the bee after it has completed pupation. Mite infestations can build up in a colony over 3-4 years, causing an abnormal brood pattern, weakened larvae and crippled adult bees, with reduced weight and longevity. Although largely dependent on the brood – the developing larvae and pupae – the mites will also parasitise adult bees, and may be visible on the thorax or in the abdominal folds. A significant mite infestation will eventually result in the death of the honey bee colony, usually between late autumn and early spring. The infection caused by the mites is termed varroosis, whereas the symptoms presented by the colony are collectively referred to as parasitic mite syndrome.

There are a number of species of honey bees, but most build their nests in inaccessible, elevated sites in order to avoid predation. Only two, the European Honey Bee (Apis mellifera) and the Asian Honey Bee (Apis cerana) construct their nests in cavities, rendering them vulnerable to the mites. However, the natural distributions of these species are mutually exclusive, and until comparatively recently A. mellifera was not exposed to Varroa mites.

Varroa jacobsoni was first described in 1904 on A. cerana in Java. At the time, it did not appear to represent a serious threat, as it was confined to drone brood and was not lethal to bee colonies. Drone larvae are favoured by the mites because they are larger than worker larvae and have a longer period of development.

Relocation of A. mellifera to the native range of A. cerana resulted in contact with the mites, probably in the Philippines, and infection spread quickly across the globe, with the notable exception of Australia. In the early 1960s the mites were detected in Japan and the Soviet Union; in the 1970s they spread to South America; in the 1980s they gained a foothold in much of eastern Europe and North America; in 1992 they were first seen in the United Kingdom; and in the early 21st century they colonised New Zealand and Hawaii. Significantly, the mites also evolved the ability to reproduce in both drone and worker brood, causing massive honey bee colony death on a worldwide basis, and having a profound impact on the beekeeping industry.

In 2000, researchers identified two separate species of the mites. Varroa jacobsoni was detected on A. mellifera, but was unable to reproduce. In addition, two races of Varroa destructor (a ‘new’ species) were isolated, the ‘Korean’ variety of which is largely responsible for the aggressive spread of the mites around the world. Subsequently, in 2008, two separate lineages of V. jacobsoni were found to be reproducing in both drone and worker

brood of A. mellifera in New Guinea; constituting an alarmingly rapid capacity for ‘host shifting’ and underlining the necessity to establish effective quarantine and control. Although European Honey Bees are almost completely defenceless against Varroa mites, some control measures have been implemented with considerable success. Varroa jacobsoni has been detected on four occasions in Queensland in 2015 and 2016 amongst A. cerana, and a concerted effort is being made to keep Australia free of further infestation. 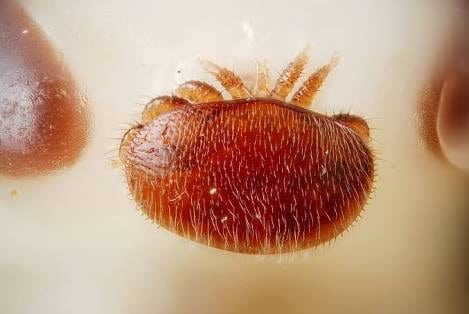 PODCAST EPISODE 58: Daniel Wood from Monsons Honey and Pollination, Mildura, AustraliaIt’s amazing where life takes you if you let it. Originally from Blackpool in the UK, Daniel Wood did not expect to fall into the profession of beekeeping when he came to Australia almost 11 years ago. Coming from an army background, it was romance that led Daniel to bees— when he met one of beekeeper Trevor Monson’s daughters Shiree, he fell in love, and he also fell into the family business! These days, Daniel is a very happy and skilled beekeeper, having worked for Trevor’s business Monsons Honey and Pollination for 7 years, helping with pollination, including the hectic annual 3-week event where Trevor and his family and staff coordinate approximately 120,000 hives around the state to help pollinate almond orchards. Daniel also spends a lot of time breeding queens for the company, with an aim of breeding 160 queens every 2 weeks!Based in Mildura—a regional city in northwest Victoria, Australia, on the banks of the Murray River— Monsons Honey and Pollination are noted as being one if not the leading pollination specialist and provider of pollination services in Australia. This is due to the businesses many years of experience, research and their development of practical and innovative solutions that can maximise crop quality. It is the Monson’s deep knowledge of bees, and their passion for pollination, that makes Monsons Honey and Pollination such a reliable provider of bee-related services in Australia. Trevor, Daniel’s father-in-law and the co-founder of Monsons Honey and Pollination, is much sought after by government and consultants for trees and plants, such as almonds, apples, pears, stone fruits, blueberries, strawberries, raspberries, cherries, avocados, vegetables, melons and seed crops— why? Because of these crops rely on the magic of bees to be pollinated. Together with his wife Carolyn, their children, nephew Reece, and son in law Daniel, Monsons Honey and Pollination have taken pollination services to a new level of excellence.Tune in to hear Daniel and I chat about moving to Australia from the UK, falling into beekeeping, and learning about pollination through the family business. podcasts.apple.com/au/podcast/bees-with-ben/id1512755530?i=1000525711036 www.monsonshoney.com.au ... See MoreSee Less

Bee Watching Your Way to Higher Consciousness Watching bees is the perfect way humans can connect with a greater consciousness, practice mindfulness and add years to their life. I recently came across this little (yet profound) image on the Internet, and while I can’t provide you the scientific evidence to back up this claim, I feel it to be true from the bottom of my heart. “Bee watching is a secretly miraculous meditation. As bees dance from flower to flower, absorbing the sun and distributing pollen along the way, they emit a healing frequency that reverses disease and promotes soul and emotional restoration.” As someone who has spent more years of his life watching bees than years without, I can vouch for the relaxing and meditative effect of watching these miraculous creatures go about their lifesaving, world-changing business. Connecting to consciousness is a big thing, and although I am still coming to terms with the idea that there are forces greater than ourselves, nature shows me each and every day that this is in fact true. Religion and other human-cultivated spiritual belief systems aside, a belief in nature—which is something I hope everyone cultivates during their lifetime—can teach us how to act with goodness; provide lessons in respect and humility; show us the natural cycle of all things and help us to feel at peace in our own journey; and encourage us to embrace flow, resist greed and realise that true beauty exists in all creatures, plants, elements, and people. Another thing I know is that beekeepers DO seem to have long and happy lives, and as this little picture I found suggests, this could be due to the meditative effect of watching bees rejuvenating humans on a cellular level! Miraculous. Although I don’t claim to have the answers, from my personal experience as a beekeeper and as someone who spends most of the time with other keepers, I can say that being with bees, being aware of their processes, and helping them to do their job leads to a lot of bee-watching, which, in turn, equates to much meditation! Being in nature and understanding how this small but mighty insect impacts on the whole ecosystem is surely also a huge dose of therapy for those of us feeling overwhelmed by this modern life. So, when you are feeling anxious or lost, when you need to calm your soul and tune into the bigger picture, go out into the garden or to your local park or bushland and walk about until you find some yellow bee friends. Watching them carry out their world-saving business is a balm for us humans who are often unsure of exactly what we should be doing or how or for what reason. While the mere buzzing about is therapeutic, there is also much guidance in watching a creature who despite being small knows that every tiny good deed makes the world a better place. ... See MoreSee Less