Parasitic Varroa mites, and Varroa destructor in particular, represent an enormous global threat to the beekeeping industry and have been implicated in the death of honey bee colonies on a massive scale. Since the early 1960s the mites have spread around the world. Australia remains free from V. destructor, however V. jacobsoni (the second species of Varroa mite, which is normally associated with Asian Honey Bees) has been detected in four isolated instances in Queensland in 2015 and 2016, and poses a continuing threat.

Although most European Honey Bees (Apis mellifera) are powerless against the insidious mites, some Russian strains exhibit resistance, as does an isolated subspecies of bee found in Libya in 2010. An estimated 10% of honey bee colonies also possess a behavioural trait known as VSH, or Varroa sensitive hygiene, in which pupae infected by the mites are detected and removed from the nest. Although the mechanism by which this operates is unknown, it has been shown to result in a reduction of infestation of more than 70%. In fact, bees with a high degree of VSH can keep mite infestations below the threshold recommended for treatment with pesticides. VSH is a heritable trait, and VSH strains have been commercially available since 2001. Beekeepers can therefore use VSH queens to instil resistance to new colonies.

Chemical control via acaricides or miticides must be applied with caution in order to minimise the contamination of honey that potentially could be consumed by humans. Initially, synthetic acaricides such as Fluvalinate (a pyrethroid) and Coumaphos (an organophosphate) proved effective in regulating the transmission of V. jacobsoni, however, resistant strains of mites subsequently developed. Naturally occurring chemicals such as formic acid, oxalic acid, mineral oil, sugar esters, extracts from hops and various powders have also been used in mite control.

One popular mechanical method of control involves the use of a perforated bottom board in the hive. This is made from mesh that allows mites to drop through if they fall off a bee or from the comb, and may be combined with insecticides and glue traps. Studies have shown the perforated bottom board alone has negligible impact, however, when combined with heating (to a minimum of 40oC for periods of several hours at a time, which causes the mites to drop off the bees), this has been demonstrated to be an effective control regime. This method is widely used in Europe.

Other control measures focus on the mites’ preference for drone brood, since it is larger and has a longer developmental period than worker brood. Specially sized frames may be used to encourage the queen to lay drone brood, which once capped is removed and frozen, killing the mites. Alternatively, since the drone brood is typically located on the bottom and outer margins of the comb, this may simply be excised, thereby reducing infestation. The limited drone brood cell method relies upon restricting the size of brood cells to trap the mites; results have been inconclusive.

In Australia, early detection of Varroa mites entering the country is vital, and cargo ships and ports are closely monitored for signs of infestation. 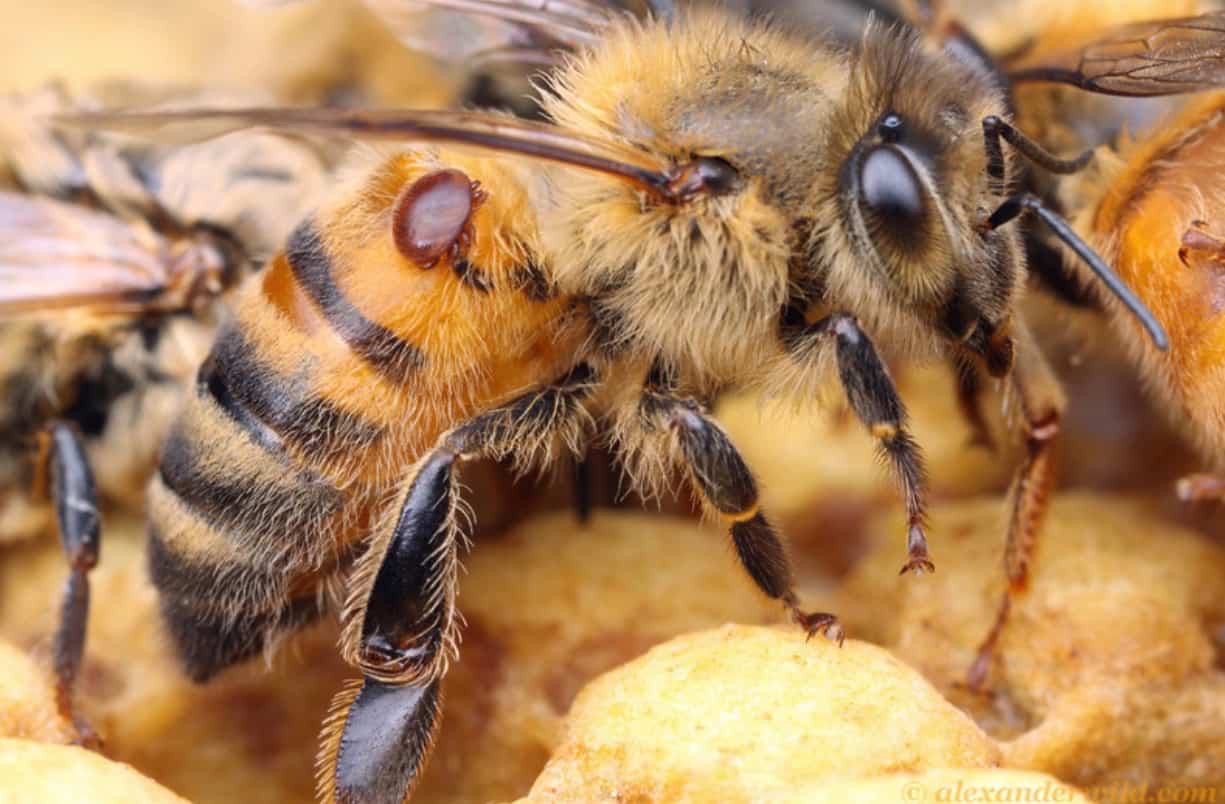