How Ben makes a living keeping bees in Melbourne
BY ADRIAN O’HAGAN · JANUARY 22, 2017

Urban beekeeping is going from strength to strength, with more beekeepers than ever in the state of Victoria alone. A handful of beekeepers have taken the next step into self-sufficiency , and have actively sought out a livelihood from this. Honey production and providing pollination to farmers and orchards are among the most common ways to generate income streams from beekeeping, but many beekeepers also offer bee-collection services for when a swarm has found itself in a place where people would prefer they rather not be!

Well-known local Melbourne artisan honey sellers include Rooftop Honey and Backyard Honey – and now Ben’s Bees is joining the crop. We recently spoke to Ben about all things bees, pollination, and finding swarms in all the wrong places!
Ben often records his hive inspections, proving handy for future checks – as well as sharing online with his social followers
How long have you been keeping bees for?

I have been keeping bees for almost 24 years. When I was 14 I told mum and dad that I didn’t want a puppy or a kitten – I wanted a bee hive! I was made to save up my own money, so I started fruit picking before and after school and on weekends. I saved up $60 and was lucky enough to find a local beekeeper in the Yarra Valley who dropped off a hive for me. This started my journey into the wonderful world of bees. Seven years ago I turned it into a business which keeps me incredibly busy six months of the year.

At what point did you consider transitioning from a ‘backyarder’ beekeeper into a professional one?

As a young adult I moved around between states and was not very settled. After getting married my feet became firmly planted and I was asked to remove some bees in spring – mostly swarms. I was charging a few dollars for my time, but quickly realised that I had many overhead costs. Then I was asked by a real estate agent to safely remove some bees from one of their rental properties, for which I required public liability insurance. That was seven years ago, and now I have an established business.
It takes 500 honey bees four weeks to make one kilogram of honey, and they will travel the equivalent of three orbits of the earth in distance to collect it.
What advice would you give to someone who is thinking of pursuing a livelihood working with bees and bee hives?

If you have no prior experience at all, the first thing I would recommend is to buy some books. The Australian Beekeeping Manual by Bob Owen is brilliant; it is very well written and tells you everything you need to know about bees. But there is nothing like opening a hive. If you can spend some time with a local beekeeper you will be amazed at how much you will learn. Beekeepers are always a friendly bunch and in my experience there are never any egos involved.

What would you consider to be one of your more ‘unknown’ roles as a beekeeper?

I specialize in the safe removal and relocation of bees. It’s quite interesting how many people get European Wasps confused with European Honey Bees. I’m often called out to remove bees and I turn up to the site only to find they are really wasps! I am now registered to exterminate wasps; they serve no purpose whatsoever in Australia and are incredibly dangerous, causing more deaths in this country than venomous snakes! I kill them humanely with my own special preparation of organic dust.
A swarm of bees safely removed
What are the biggest issues facing ethical beekeepers in Australia right now?

The biggest issue at the moment is the use of chemicals as pesticides and fungicides. I can speak from personal experience, as I have had my own hives killed by chemicals used on farms. I totally understand that sometimes chemical control of pests and diseases is necessary for commercial crops, but it can simply be the method of application that endangers bees, along with other fauna and flora. Having said that, the neonicotinoids are a particularly toxic family of chemicals that have already been banned in most countries of the EU and some states in the US.

Another threat facing Australian beekeepers is the Varroa mite. Ours is the only populated continent in the world that remains free from the mite, and it is incredibly important that it stays that way. Late last year, I was lucky to be part of a team in Townsville following up on a Varroa mite incursion. The biosecurity people were brilliant, and managed to contain the threat within a few short weeks.

What does the future have in store for Ben’s Bees?

I am incredibly fortunate to love my work with the bees. Over the years I have expanded my numbers gradually, so that now I am in a good position and don’t need to push the bees for production of honey. I have a fantastic social media presence, which is updated almost daily. In the future, I plan on increasing my number of hives from 150 to 250 or more. This will help me develop a unique service where I rent out bees for pollination on organic farms, or other locations where the usage of chemicals is minimised.
The honeybee colony has a fixed address, leading a sedentary existence. This is not a problem as long as one stays at home, and for the greater part of their lives, the bees do not leave their nest. A flow of material and energy must nevertheless be maintained, and the foragers have no choice but to fly out into a dangerous world in search of flowers.
You can learn more about Ben at his website www.bensbees.com.au, or follow him on Facebook or Instagram. If you’re keen to learn more about beekeeping, then check out the Natural Beekeeping Group (an offshoot of Permaculture Victoria) – they have regular intro classes which are a great way to introduce yourself to the gentle art of the beekeeper! 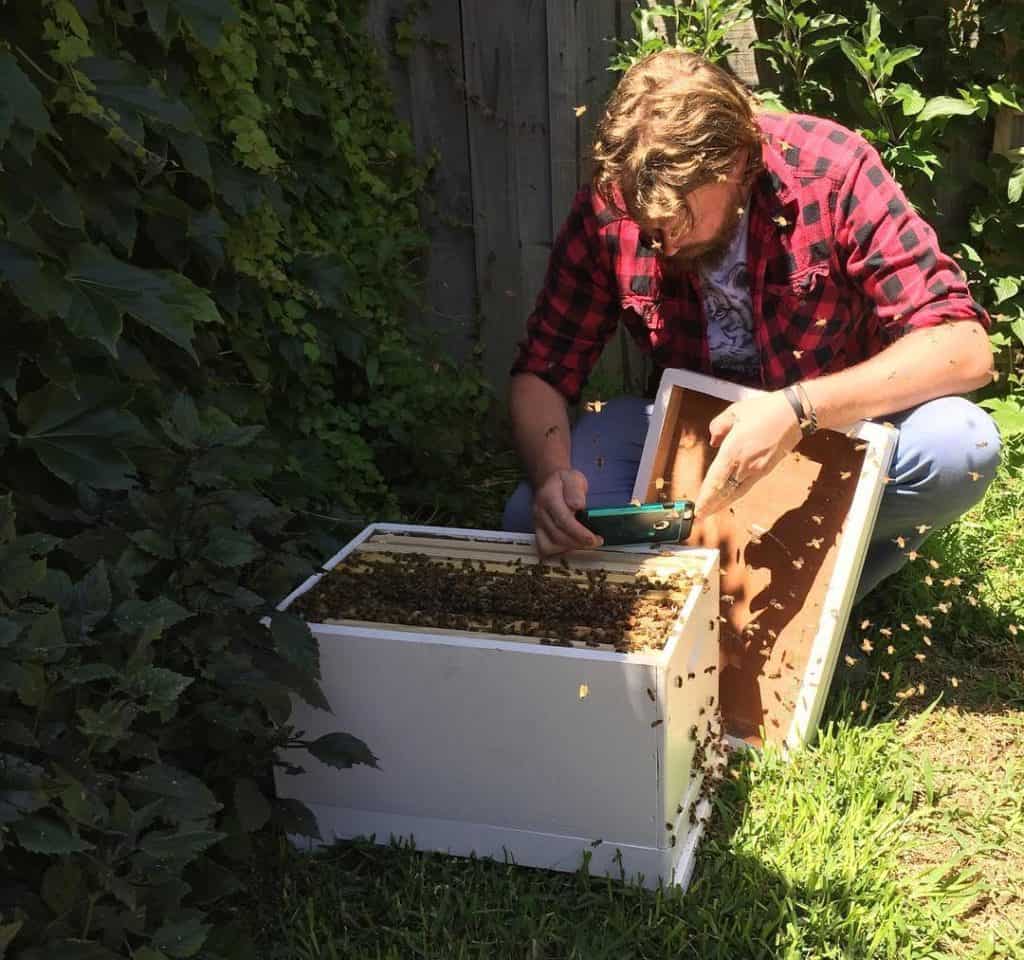 How Ben makes a living keeping bees in Melbourne
Tagged on: honey melbourne