Originating in South Africa, the Small Hive Beetle (Aethina tumida) was found in Florida in 1998 and has since spread across the eastern USA, where it has caused considerable damage to commercial apiaries. Larvae and adults consume honey bee brood, comb, honey and pollen: comb is destroyed by burrowing activity and the remaining honey is spoilt. Eventually either the bees will leave or the colony will inevitably die out.

In October 2002, Small Hive Beetles were discovered in Richmond, NSW, by apiary staff of the University of Western Sydney. It is probable that the beetles had been in the country for a year or more prior to detection, and movement of hives had already spread the infestation to other parts of NSW and to Beerwah, near Brisbane, where beetles were discovered in commercial hives at around the same time. Small Hive Beetles (or SHB) had also spread to feral colonies of European Honey Bees (Apis mellifera), rendering eradication impossible.

Temperature and humidity are important factors in the lifecycle of SHB, and warm, humid conditions in Florida were ideal for the establishment of this pest. Climatic conditions are similar in the coastal fringe of eastern Australia, where the beetles have already had a major impact. They are common throughout New South Wales and Queensland, and have been found in every state and territory, with the exception of the Northern Territory, southern Western Australia and Tasmania. Small Hive Beetles are more prevalent in areas with sandy or loamy soil, since this is preferred for pupation.

In Victoria, the proliferation of SHB is inhibited by cooler climate, and the full effect of this pest is yet to be determined. Small Hive Beetles were first detected in the state’s north-west and the Goulburn Valley in 2005. Since that time, they have also been found in central and north-east Victoria, and in Montrose, on the outskirts of Melbourne. To date, these remain isolated instances, and there has been no widespread occurrence of SWB. Nevertheless, Agriculture Victoria cautions that beekeepers will need to revise some of their practices to minimise the impact of SHB.

In the United States, sprays have been used to combat SHB, however this is a controversial approach and there are no chemicals approved for use in beehives in Australia. Instead, an integrated pest management strategy is favoured. Hives should be opened and checked regularly for signs of SHB infestation, remembering that exposed adult beetles will quickly attempt to hide, and that larvae develop in capped cells and may therefore not be immediately apparent.

Although far from a complete defence, in-hive traps of various designs have received some favourable reviews. These include hooked mats, which snare beetles on top of frames; plastic traps that are placed between frames; and slotted bottom boards, under which a metal tray is baited with vegetable oil and vinegar to attract and kill the beetles. Diatomaceous earth is also poisonous to SHB.

Strict hygiene is important as SHB is strongly attracted to the smell of bees, honey and pollen, and is also believed to be able to detect honey bee pheromones. Opening of hives should be minimised, and bee products or debris should be processed or discarded as quickly as possible. Bottom boards should be kept clean, and empty supers avoided. Small Hive Beetles typically select weak colonies in which to reproduce, and the maintenance of strong, compact hives is an effective deterrent. Hives should be kept in full sun, as SHB prefers those

located in the shade. Research has proven that cold treatment (for six hours in a freezer at -13oC or below, or 12 days in a cool room at 1-9oC) is an appropriate method of disinfesting combs.

Small Hive Beetles may be spread through the movement of hives or bee products and equipment, including protective clothing. However, frequent relocation of hives may be valuable in that it denies the beetles the opportunity to build up numbers in the soil. For this reason, backyard hobbyists are particularly vulnerable to SHB. Adult beetles are capable of flying up to 15km in search of new colonies to infest.

Interestingly the nests of Australian native stingless bees seem far less attractive to SHB, and rarely suffer serious damage provided that they are intact. Native bees have been shown to use nest resins to combat the beetles, which are engulfed with these gluey substances.

Small Hive Beetle represents a serious ongoing threat to the Australian beekeeping industry. In Victoria, beekeepers are required to notify their local apiary officer whenever the presence of SHB is detected, in order for the Department of Environment and Primary Industries to gain further knowledge regarding infestation in the state. 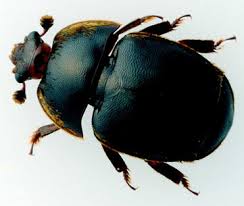 Sundays have a special quality. In summer, it’s that sun-kissed, beachy exhaustion that sets in after many hours in the heat, swimming, finding shade, BBQs,…

Pollination and Pollinating Vectors. Pollination is the delivery of pollen (containing males gametes and manufactured by the anthers of a flower) to the female stigma…

The Anatomy of the Honey Bee: Part Two The honey bee might be meagre in size. However, its tiny body is a well-constructed and highly…

Bees – much more than mere bugs! For me the fascination all started at a young age. I would watch these buzzing invertebrates cruise from…