Eucalypts are perhaps the defining characteristic of the Australian landscape. An ever-present and immediately recognisable cornerstone of the Aussie bush, oils held in the leaves also impart an unmistakeable medicinal aroma. There are more than seven hundred species contained in the genus Eucalyptus, along with upwards of a hundred in the closely related genera Angophora and Corymbia, which are nonetheless also regarded as eucalypts. All but nine species are native to Australia. Eucalypts are also renowned as the source of a wide variety of boldly flavoured honeys, but it is worthwhile first to consider some of the fascinating information that surrounds the plants themselves.

The first botanical specimens of eucalypts were collected when Captain James Cook arrived in Botany Bay in 1770, but it wasn’t until Cook’s third voyage of discovery, in 1777, that material taken from a messmate (E. obliqua) on Tasmania’s Bruny Island resulted in the description of the genus. Today, eucalypts are actively cultivated in many parts of the world, including southern Europe, China and other parts of Asia, Africa, the Middle East and the Americas. They have become economically valuable as a source of timber due to a fast growth rate, but are also important for honey production and essential oils, in addition to being used as windbreaks and to reduce erosion and lower the water table.

Eucalyptus species vary substantially in size and habit; ‘mallee’ eucalypts are low growing forms, usually no more than ten metres in height, with multiple stems, that originate from a bulbous lignotuber (or mallee root). These are common across semi-arid parts of southern Australia (the term itself is derived from an Aboriginal language and means ‘water’). At the other end of the scale, the mountain ash (E. regnans) is the tallest flowering plant – and quite possibly the tallest plant – in the world. The tallest living specimen, ‘Centurion’ (also known as ‘Bradman’ in a nod to the famous cricketer’s batting average) is located west of Geeveston, in Tasmania, and has been calculated to have a height of 100.5 metres. There are sixteen extant specimens in Tasmania known to top ninety metres, while a specimen felled at Thorpdale, Victoria, in 1881 measured a whopping 114.3 metres on the ground. This places it just short of ‘Hyperion’, the world’s tallest living tree, a coastal redwood from California that measures 115.85 metres. But even this would be dwarfed by three mountain ash noted by prominent early Victorian botanist Ferdinand von Mueller, with estimated heights between 122 metres and 146 metres. Perhaps more reliable is the report of a fallen giant measured at 132.6 metres by William Ferguson, an employee of Forests Commission Victoria, in 1872. Wood from E. regnans was a major source of newsprint in the twentieth century, and mature communities of mountain ash have been found to store more carbon than any other type of forest.

All eucalypts produce a fresh layer of bark every year; many species shed the old bark, but in others it is retained and accumulates, such as the stringybarks. Almost all eucalypts are evergreen; the long-lived leaves hang downwards and are covered with oil glands, the secretions of which make them generally unpalatable to herbivores and may be toxic if consumed in sufficient quantity. Koalas and some species of possums have developed a tolerance. The distinctive flowers lack petals (which are often fused to form the ‘cap’), and feature numerous fluffy stamens in shades of white, yellow, pink or red, while the conspicuous fruit capsules are immediately identifiable as ‘gumnuts’. Sometimes large eucalypts can drop branches unexpectedly, and this is exacerbated by the relatively high density of the wood.

Perhaps one of the strangest – and little known – facts about eucalypts concerns their ability to act as an indicator of the presence of hidden deposits of gold! Eucalypts’ strong root systems are capable of drawing copious amounts of water from deep in the soil, and in the process may also take up small particles of gold and other minerals, which eventually resides in the leaves, and can be detected by X-ray imaging 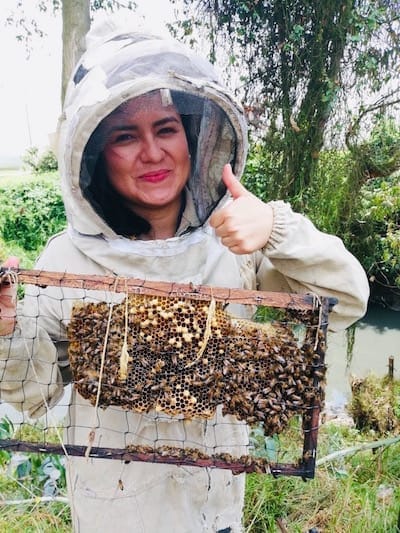 Ben’s Bees Community: Judith Pineros, Colombia  As you all know, I love to talk about the folk who make my job pleasurable, passionate and deeply…

Manuka honey- what’s all the fuss about? Manuka honey is automatically associated with inherent medicinal qualities and a hefty price tag, and is also often…

The Colour of Honey Part 2: As Blue as the Sky and Royal Purple. We’re exploring honey with an unusual appearance, but this next one…