Difference between Bees and Wasps

How do you tell the difference between a bee and a wasp? Both are insects of the order Hymenoptera that may be found in large colonies, or prefer a solitary existence. Both may be brightly coloured, with yellow and black stripes, and both may deliver a painful sting. And to confuse matters further, both may be capable of multiple stings, and both can eat nectar!

Honey bees are unique in having a barbed stinger that is connected to their digestive system. Once the stinger is plunged into a potential predator, it cannot be withdrawn and is ripped from the bee’s body, eventually causing the insect’s death. Wasps can retract their stingers and sting repeatedly, as can many other bees, while some native Australian bees have no sting at all. Honey bees also produce honey and beeswax; wasps cannot, but neither can many other species of bees. Furthermore, although bees are more likely to be furry, wasps can have hair and some native bees are quite smooth and shiny in appearance.

If you’re thinking that positive identification sounds almost impossible, luckily there are some definitive differences between bees and wasps, in terms of both morphology and behaviour. Bees are vegetarian. They have evolved into important pollinators, and spend much of lives their lives visiting plants and flowers to gather pollen and nectar to feed their young. Although adult wasps may occasionally consume nectar and pollen, and be drawn to overripe fruit and sugary substances, they are essentially predatory, and prey on or parasitise insects.  Bees have robust, rounded bodies with flattened legs to collect pollen (some species have special structures on their hind legs called pollen baskets for this purpose). Wasps have cylindrical bodies, with a narrow waist connecting the thorax to the abdomen, and slender legs. They are sleeker and more streamlined for hunting. Bees typically retract their legs so that they are not visible in flight, whereas wasps do not. Wasps are also often strongly attracted to lights at night.

Since they do not possess wax-producing glands, some wasps construct nests out of mud. Others gather weathered wood, which is chewed and mixed with saliva to form a papery substance that can be used to build large and elaborate nests. Many bees and wasps (including those in large colonies) hibernate during winter; honey bees do not, existing on food reserves contained within their nests and warmed by the heat generated by thousands of workers. Interestingly, the world’s smallest known insect (with a body length of only 0.139mm) and the smallest known flying insect are both fairy wasps of the family Mymaridae.

Although bees will defend themselves if necessary, wasps, as predators, are naturally more aggressive and more easily provoked. Wasp stings are often more painful than those of bees.
Hopefully, you now have a better idea of the differences between bees and wasps. But if you have a troublesome infestation of bees or wasps on your property, accurate identification is essential as this will determine appropriate methods of control. For this reason, it is always advisable to consult an expert beekeeper or apiarist. In Melbourne an experienced beekeeper can usually assist within 24 hours. 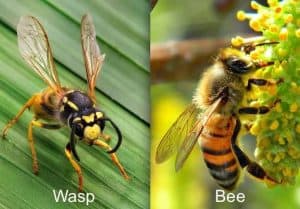 Bee Smarts: The Concept of Zero There are some concepts that seem simple, but if we really think about them, are actually incredibly abstract. These…

Bee Smell: Perfume or Pong  Smell – I never really understood or appreciated its power. For whatever reason, there is a certain allure to touch,…