Worker honey bees are normally law-abiding, industrious creatures, but sometimes they can turn to a life of crime – and it may pay handsome dividends.

‘Robbing’ in beekeeping parlance is when foraging bees from one hive attempt to steal honey from another colony. This usually occurs when there is a shortage of nectar. It could be in early spring, before many plants begin to flower, or during the summer, at a time when there is a temporary lull in blooming. Under such circumstances, foraging honey bees continue to be driven by the search for resources and can be attracted to the smell of honey in a hive that may be some distance away. Weaker colonies are usually targeted by robber bees; a strong colony can mount a formidable defence, and even a small colony can repel potential honey thieves by plugging the entrance to their hive with a few valiant guards.

Robber bees will carefully examine the hive for unguarded entrances or other weaknesses. They may resort to subterfuge; trying to sneak past the guards, or flying around in the vicinity of the hive long enough that that they acquire its scent and are therefore accepted into the colony. Back at their own nest, successful robbers will communicate the details of their heist and persuade other foragers to join them on the ‘dark side’. They will then return to the unfortunate target hive en masse with a wave of bandits. The guard bees will fight to the death to defend the hive against intruders, but can be quickly overcome by sheer weight of numbers. Frenzied fighting will ensue, with raiders that gain access to the hive engaging in indiscriminate killing and ripping apart the wax comb to plunder the honey contained within. The robbers will break off their attack in the early evening, only to return again with renewed vigour the next day. The doomed hive is eventually stripped of all its honey and left to starve.

Beekeepers may sometimes mistake the frenetic activity associated with robbing for swarming or the orientation flights of young bees. Although swarms may occasionally take over a weak existing colony, swarming bees will normally be seen leaving, rather than entering the hive. Swarms are unlikely to fight and will usually depart quite quickly, whereas robbing may continue until sundown. Orientation flights are made by young, ‘fuzzy’ bees to familiarise themselves with their surroundings. They will methodically fly back and forth near the entrance of the hive, but are not the slightest bit interested in foul play!

Robbing may occur between hives in the same apiary and can cause significant damage. Colonies that fall victim to this practice may be completely wiped out. Those that do survive will be substantially weakened and bereft of resources. The bees themselves are also often difficult to manage. Robbing is best prevented by the maintenance of strong colonies and by leaving the bees with sufficient honey to tide them through a dearth of nectar. If too much honey is removed, this may encourage foraging bees to pilfer from other hives. Supplementary feeding may inadvertently stimulate robbing, as bees are attracted to open hives and the smell of sugary syrup or honey.

Robbing may also be prevented by reducing the number of entrances to the hive, making it easier for guard bees to defend. Screens can be used to block superfluous entrances without compromising ventilation. If a colony is targeted by robbers, the attack may be frustrated by draping a wet sheet over the hive. Some beekeepers recommend completely screening all entrances for a couple of days. If a colony has been weakened by robbing, it may be prudent to merge it with another prior to the onset of winter.

Robbing is a departure from the normal, strictly ordered life of the honey bee, in which the individual subjugates itself to the rules of the colony and each colony keeps to itself, concerned only with toiling assiduously to provide for its brood. It does, however, ensure the ‘survival of the fittest’ when resources are scarce. 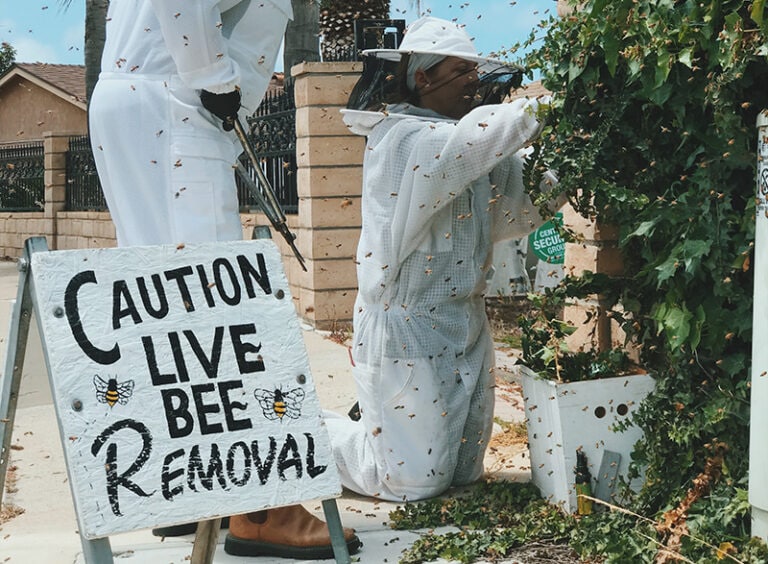 Pest Control Melbourne The A to Z of Pests in Melbourne. Part 6. This instalment in our continuing series about pests around Melbourne focuses on…