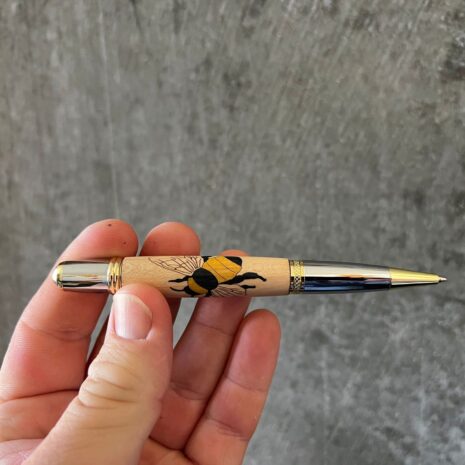 These are handmade quality pens.

The bee pen comes in a wooden case.

Enhance your ability to communicate!

Despite being constrained by a brain the size of a sesame seed, honey bees are nonetheless capable of performing the complex calculations necessary to navigate unerringly to a food source – the coordinates of which are communicated to the colony using the only abstract language not invented by humans.

The ‘waggle dance’ or ‘wag-tail’ dance is performed on the surface of the comb, and transmits both distance and direction to other foragers. The duration of the ‘waggle run’ portion of the dance can be directly correlated with distance, while the orientation that the bee adopts during this phase indicates direction relative to the position of the sun. If the resource is close to the hive, the waggle phase may be truncated to give an indication of distance but not direction.

Honey bees’ proven capacity to convey complicated spatial information via the waggle dance is undoubtedly one of the most striking examples of communication in the animal kingdom. But amazingly the bees have two other methods of communication.

The ‘dorso-ventral abdominal vibration’ (DVAV) signal was first identified about ninety years ago and is also commonly known as the honey bee ‘wake up call’. This is produced when bees (usually workers) enthusiastically shake their abdomens, generating vibrations which can be transmitted direct into the honeycomb.

The DVAV signal is widely regarded as a cue to prepare for increased workload. Recipients have been observed to intensify their level of activity, and seasonal peaks in DVAV signalling have been shown to coincide with the most productive foraging periods. An increase in the amplitude of DVAV signals has been noted prior to swarming, and honey bees may also use these signals to penetrate honeycomb and check on its contents.

Honey bees also utilise chemical communication via a complex array pheromones, which are released as liquids or vapours and picked up by other bees using receptors on the antennae and other parts of the body. Brood recognition pheromone inhibits ovary development in workers, while queen mandibular pheromone, or QMP, is an important indicator of the presence of a healthy queen. Two alarm pheromones are produced; the first smells like bananas and is deployed when a bee uses its sting. It attracts other bees and provokes defensive behaviour.

The second repels and ultimately paralyses intruders. Other pheromones help regulate the balance between foragers and nurses, assist foragers to return to the colony, inhibit the construction of queen cells, and promote the congregation of drones at mating sites. Pheromones can modify the behaviour of a single insect or dictate the fate of the entire colony!

Given the extraordinary ability of honey bees to communicate with other members of the colony, it is perhaps appropriate that a language of sorts, featuring a variety of unusual terminology, has grown up around the practice of beekeeping. Some of this can be quite confusing: for example, bee glue or propolis (a mixture of beeswax and plant resins) is also sometimes referred to as cerumen, however, this name is more commonly associated with the ear wax produced by humans and other mammals.

Propolis mixed with soil and bee excrement is harder and used by Australian native stingless bees to encase their nests; this is called batumen. In the medical fraternity, involucrum refers to a layer of new bone growth. This word can also be used to describe the wafer-thin, multi-layered propolis that native stingless bees use to insulate their brood chamber. A ‘super’ is a layer of honeycomb in which honey is deposited, and which sits above the brood comb, while a ‘skep’ is a traditional form of woven conical basket that has been used to house bee colonies for 2,000 years.

The bizarrely named ‘slumgum’ consists of the brown or black residue that results from impurities in the brood comb and sticks to the bottom of the wax when rendered. It’s a powerful attractant for bees and can also be used to make crude fire starters and fertiliser.

It is worth noting that honey bees were also instrumental in the development and proliferation of human written communication. Beeswax tablets were in use as portable and reusable writing surfaces at least as far back as the 14th century BC. These were made of wood and covered with wax, into which characters were scratched with a pointed stylus. The entire tablet could be warmed to about 50oC and then the surface smoothed over with a straight-edged ‘eraser’ so that it could be used again and again. These devices were widely used in ancient times and persisted in some circumstances until the 19th century.

In 1888, Thomas Edison released the first commercial phonograph, which relied upon cylinders of solid beeswax as the recording medium. Although initially all the cylinders had to be recorded (or engraved) live and wore out after they were played as few as 20 times, the owner could then shave the surface of the wax smooth and make a new recording!

So, not only have honey bees developed unique and sophisticated methods of communicating with each other but they have also been intimately associated with the evolution of our written communication. These attributes are perfectly encapsulated by our beautiful hand-crafted bee pens.

Made right here in Melbourne, this handsome, high-quality bee pen features goldtone accents, a natural Australian timber barrel, and a stylish bee motive, and is attractively presented in a specially designed wooden case. The ideal gift which offers a constant reminder of the wonders of the honey bee – an insect that is surely emblematic of efficient communication! 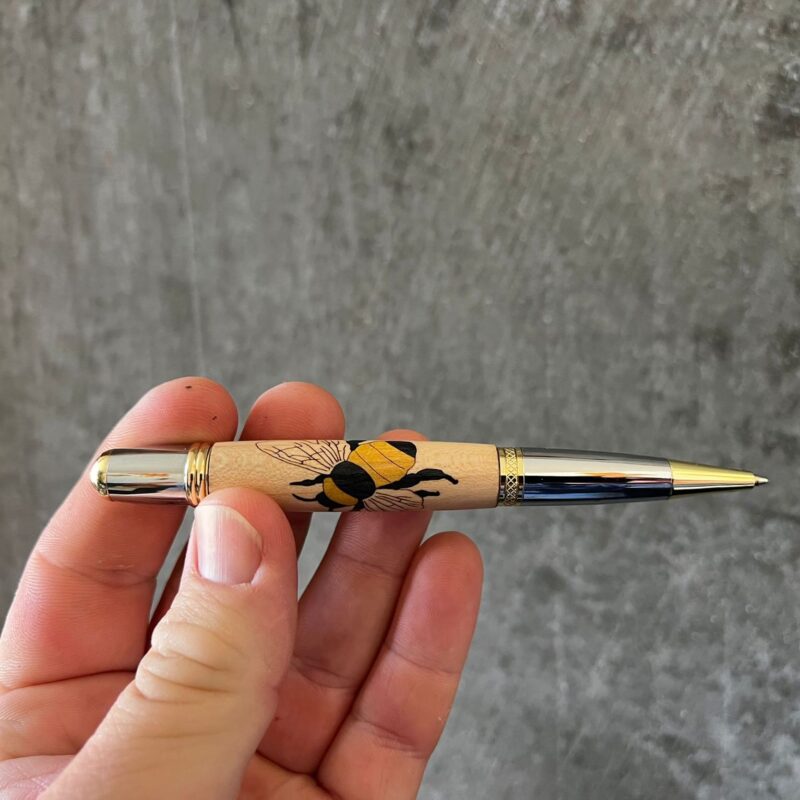