The first candles, made of whale fat, appeared in China about 200 BC; beeswax was first used in about 40 BC. Later, beeswax candles became the traditional preference of various churches. The Roman Catholic Church once required the exclusive use of beeswax candles, and was consequently responsible for importing honey bees to Puerto Rico. The Worshipful Company of Wax Chandlers is the oldest English Guild, with a history that can be traced to 1371. By the Middle Ages, beeswax had become one of the basic constituents of sealing wax, used to verify that a document remained unopened (the Romans had also used bitumen for this purpose). Beeswax is also an essential ingredient in Cutler’s resin, a waterproof adhesive that has been

used for centuries to attach knife handles, and has been found in the wreckage of Viking ships!

Additionally, beeswax has also been a popular ingredient in shoe polish since the 18th century. It has long been used in furniture polish and to strengthen and preserve thread or cordage of various types, and is traditionally employed in the manufacture of batik. Beeswax continues to be an important component of many cosmetics, and is still used in the maintenance of many percussion and woodwind instruments. In Australia, beeswax (and/or propolis) made by native bees is used by indigenous Aboriginal people to form mouthpieces for their didgeridoos.

Whether you want to belt out a few notes on a didgeridoo, or record the event on your phonograph, high quality, pure, natural beeswax is available in Melbourne, Australia, direct from experienced beekeepers or apiarists. 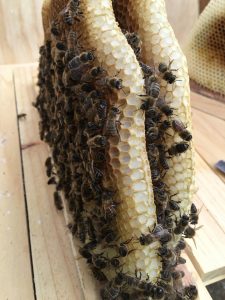 Environmental Beeswax Wraps: An Alternative to Plastic It might seem alarming (and it is) that the average Australian goes through more than 60 kilograms of…

Sweet Vietnam! Over the course of my life, I have done a great deal of travelling. There isn’t much I enjoy more than the experience…

Beeswax Wraps Part 2: A Perfect, Eco-friendly Product. Consider a product that is environmentally friendly, 100% natural, biodegradable, sustainable, easy to use and capable of…

The Three Days of Darkness, Beeswax Candles. Over the past few months, I am sure that most of our daily rituals have adjusted in a…