Ben likens his special guest for episode 84 of the Bees with Ben podcast to ‘The Jackal’ – everyone has heard of him, but no one has ever seen him! As well as being hard to track down, and something of a character, Joe Horner has developed a reputation amongst Australian beekeepers that approaches legendary status. In particular, the Joe Horner line of queen bees are considered by many to be second to none. When Ben finally does manage to nail Joe down for a chat, he admits to being a bit sketchy about the nature of podcasts, and that computers are, ‘Out of my league!’

But why are his queens arguably the best in the country? Joe puts it down to his selection process. Incredibly, he says that he hasn’t added any new blood in thirty or forty years. All of his breeding stock is contained in hives involved in the commercial production of honey, and honey production (measured per bee) together with brood viability and quietness are important criteria. In fact, Joe’s bees are so docile that he never wears a veil; when he recently harvested honey, he left his smoker on the truck!

Only 10-15% of Joe’s income comes from rearing queens, so selective breeding for improved honey production is doubly important. Inbred lines have been especially productive of late, and this season Joe collected no less than 60 IBCs full of honey from his 700 hives. He also runs a 4,000-acre cattle property and works a seven-day week – or more! Nevertheless, Joe says he never done it for the money, and that he remains passionate about the bees.

Interestingly, some of Joe’s hives have not been shifted for nearly three years, and he imposes a travel limit of around a hundred kilometres. He says beekeeping requires an in-depth knowledge of the landscape and of eucalypt species, together with a real understanding of bees and their characteristics. The demands of maintenance in addition to queen bee breeding means that he is often working 14-15 hours a day just to keep up. Every box of bees that passes through Joe’s extraction plant is weighed to determine exactly how much honey has been produced, and this is instrumental in selection for breeding.

Now 72, Joe followed his father into beekeeping on the family property when he was a teenager in the min-sixties – Joe’s son has since carried on the tradition. In fact, they all live and work on the same property, along with Joe’s daughter and son-in-law. The only other employee is a woman who has been with them for 27 years. ‘She’s family too,’ declares Joe.

What has changed in five decades of beekeeping? Joe reckons production per hive has increased dramatically, especially over the last 10-15 years. He says that selective breeding has also resulting in significant modifications in the characteristics and behaviour of his bees. He has some sage advice for any hobbyist considering making the switch to commercial honey producer – don’t get too big too fast. Joe says you can make a living from 300 hives, and it is best to concentrate on keeping the bees healthy. His apiaries are subject to six extractions per year, with an annual yield of 20-30 kilograms of honey per hive. He uses no chemicals whatsoever and does not have to contend with hive beetles or nosema. He reiterates that he attributes much of this – along with diminished swarming activity – to his work in breeding queens.

Ben asks Joe what he would change, and where he sees the beekeeping industry in ten years? Joe reveals that despite his daunting schedule, he has been battling cancer and is currently receiving chemotherapy. He is looking forward to some downtime so he can paddle down a remote river and says he has always done his own thing, but has no secrets and is happy to share the knowledge borne out of a lifetime of experience.

PODCAST EPISODE 20: Ryan Moloney (AKA “Toadfish” from Neighbours), Beach Box Honey, Australia If there is a piece of fine art that sums up the…

PODCAST EPISODE 60: Liz Frost, Technical Specialist of Bees and co-manager of Plan B, Hunter region, New South Wales, Australia There are a lot of… 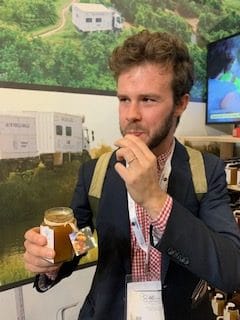 PODCAST EPISODE 3: Nicholas Bishop from the London Honey Company I love to travel. And with lockdown restrictions meaning many of us have very itchy…

PODCAST EPISODE 36: Pam Vroland from Silvan Estate Raspberry Farm, Victoria What is bulbous like a bee, but any number of pinks or reds or…

PODCAST EPISODE 4: Manuel Hempel of Vindfløy Bybigård in Bergen, Norway   As you will find out, the last time I saw Manuel Hempel was in…