Natural Life™ Propolis Liquid 40% Is a high strength liquid form of antibacterial Propolis. Propolis liquid is the most versatile form of Propolis and can be used for a variety of health applications in adults and children.

Australian Made Natural Life™ Propolis Liquids is alcohol-free, suitable for children and gentle on the stomach and liver.

All Natural Life™ products are made according to the Australian Code of Good Manufacturing Practice (GMP), so you get the highest quality of product every time.

This product is listed with the Australian Register of Therapeutic Goods no: AUSTL 75196

Propolis is a mixture of beeswax and resins collected by honey bees from leaf buds, sap flows and, particularly in tropical regions, some flowers that are known to produce resins to attract pollinators. Like honey, propolis varies in composition and colour from hive to hive and according to the flora of the area.

Propolis from Europe will not be the same as that produced in Australia, and propolis from Sydney may be quite different from that collected in Melbourne. Propolis can be green, red, black or whitish in colour, but is normally dark brown and quite sticky above 20oC. In cooler conditions such as the Melbourne winter, it is hard and brittle.

Honey bees commonly use propolis to line the internal surfaces of the hive and to repair and seal small holes and cracks. It is believed to assist in reinforcing the structural integrity of the hive, as well as inhibiting pathogens and disease.

Propolis has been used in traditional medicine for thousands of years, and a number of ancient civilisations used it to treat medical conditions such as abscesses and tumours and to assist the healing process. The Egyptians used propolis as an ingredient in the embalming process of mummies.

Today, a wide variety of products containing Australian-made propolis are marketed as beneficial to boosting immune function and general health, as well as to treat coughs and throat irritations, infections, cold sores and genital herpes, and aid in healing after mouth or dental surgery. Propolis has even been suggested to be of assistance in the treatment of some cancers. It is a common additive in skincare and beauty products and can be purchased in pharmacies and health food stores in the form of creams, ointments and lotions, as well as tablets and capsules.

Propolis is thought to have antibacterial, antiviral, antifungal and anti-inflammatory properties. Analysis has shown that it can contain natural pesticides and a number of compounds that demonstrate antibacterial properties, along with antioxidants and bioflavonoids. Of course, any potential medicinal properties will vary according to the exact source of the propolis – honey bees are not fussy and have even been known to collect manmade caulking agents.

Although limited scientific research has been conducted on the properties and potential health benefits of propolis, the National Institutes of Health (NHI) have concluded that it is ‘possibly effective’ for treating cold sores and genital herpes, and for assisting the healing process after oral surgery. There is additional evidence to suggest that propolis may speed healing and is a good option for treating the herpes virus, and it is also being investigated for the potential development of new drugs with immunomodulatory, anti-diabetic and anti-ulcer applications. As yet, researchers are not certain how propolis works, and there is no medically-recommended dose rate.

Beekeepers can use special traps to harvest propolis from within their hives, and a South African study has shown that this is beneficial to apiarists because net profitability is improved with the collection of both honey and propolis. Recently, however, the beekeeping industry in Australia has come under direct threat due to the detection of Giant Pine Scale (Marchalina hellenica), which was recorded for the first time in late 2014 in Melbourne and Adelaide. Giant Pine Scale is a scale insect that sucks the sap of pine, fir and spruce trees, causing dieback and sometimes eventually the death of infected trees. In late 2015, Giant Pine Scale was found outside of the Restricted Area near Tyabb, southeast of Melbourne. The basic control method is to inject Imidacloprid, a neonicotinoid pesticide, into the stem of trees. The Victorian State Government has stated that it does not know what effect this will have on Melbourne’s bees, however, honey bees often collect the sap of these trees to make propolis, and neonicotinoids can have a devastating effect on hives.

Propolis is also used as an ingredient of varnish in the manufacture of stringed instruments, and to make chewing gum and car wax. Propolis made by Australian native bees is traditionally used by indigenous Aboriginal people to fashion lip pieces for their didgeridoos. It is sometimes also referred to as cerumen, although this name is more commonly reserved for human ear wax! 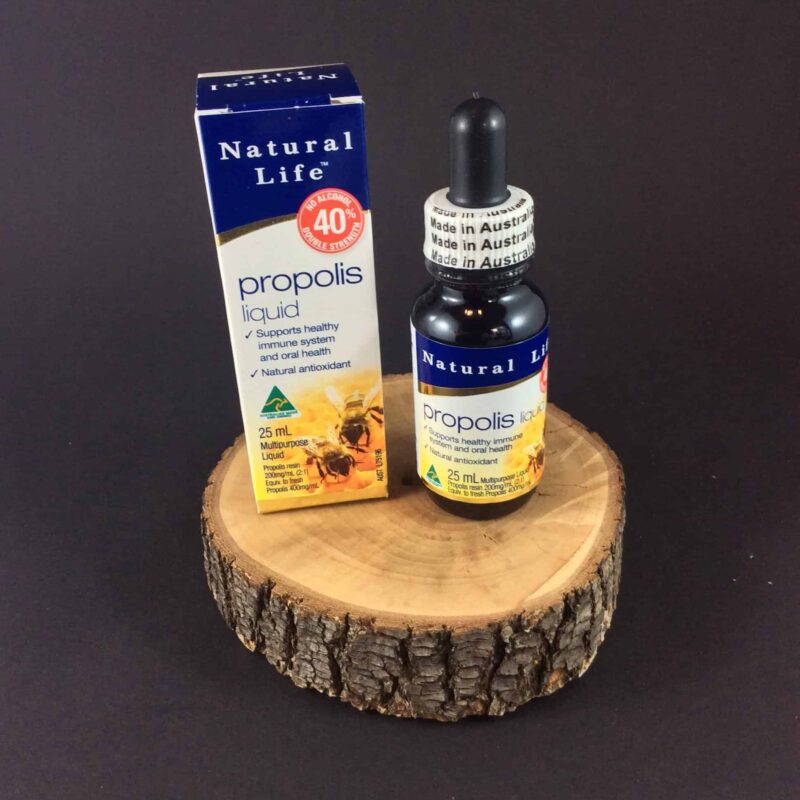