John Edmonds is a chatty, enthusiastic, warm-hearted bee bloke and business owner. With a wealth of experience that goes back into his family history, John is noted for saying, “keeping bees is like a jigsaw, get all the little parts of the puzzle together and you will get the finished puzzle.” Owner of Edmonds Honey based in Geelong, John is the only commercial beekeeper I know of in Australia that uses jumbo-sized beehives (similar to the ones used in Europe), and he does mighty well with his set up. For these reasons, I am beyond delighted to welcome John to the BEES WITH BEN podcast for Episode 8!

John’s business, Edmonds Honey, is a family affair that began with John’s father, Murray. Murray Edmonds began beekeeping after the Second World War, when he received his first hive from his uncle. Having spent his holidays around familial bee lovers who kept their own colonies near Tallangatta, he learnt some of the tricks of the trade. John’s father kept bees at Ruby in Gippsland before moving to Geelong where he then kept hives at the You Yangs, Brisbane Ranges, Bannockburn and Balliang. John followed his father’s lead, accompanying him to the hives, and helping out his dad where he could. As the years progressed, and due to some tough circumstances, Murray and John would spend their evenings making bee boxes and frames for money – the silver lining being John starting to keep his own bees! As time rolled along, John purchased beehives, a honey extracting caravan, and the tools he needed; soon after, in 1982, Murray suggested they partner up, and Edmonds Honey was born!

As the business grew, Edmonds Honey began selling to markets, supply distributors and stores. The Edmonds started to rear queen bees for sale, finding the best race of bee for the Southern Victoria region to be the Carniolan – as John described, “They proved to be thrifty, docile, still on comb, productive, disease resistant and excellent wintering.” In 2001, Murray retired. Sadly, soon after, John’s dear friend Leon became ill, and John took over his beekeeping equipment sales. Nowadays, Edmonds Honey has around 500 beehives in the Western half of Victoria for honey production, mainly on forest and farm sites. Edmonds Honey, as described by John, is “produced without chemicals and is a as natural as possible and we endeavour to have straight-line varieties.”

So, tune in to hear John and I chat about John’s journey, his family business, and some incredible anecdotes such as the remarkable ways bees wax was used in the 1940s to lubricate bombs and bullets in World War II! Don’t miss it!

In episode 83 of the Bees with Ben podcast, Ben chats with Sarah Calleja of Randox Food Diagnostics, a subsidiary of Randox Laboratories. With over…

PODCAST EPISODE 48: Peter Debicki, The Polish Beekeeper, from Burrumbeet, Victoria, Australia It’s a strange phenomenon, but sometimes in life you repeatedly get drawn to…

PODCAST EPSIODE 74: Michael Johnson, Co-founder of The Basin Backyard, Knoxfield, Victoria The Melbourne suburb known as The Basin (of the City of Knox) is,… 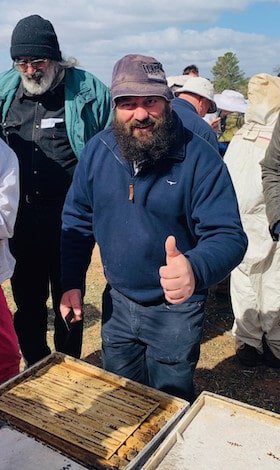 PODCAST EPISODE 27: Michael Haddad from Sparkke Natural Brewery, Adelaide. As the summer starts to slowly warm up in Melbourne, and Christmas bells are ringing…

PODCAST EPISODE 25: Steve Donohue, beekeeper and author of Interviews with Beekeepers Times flies when your… a beekeeper! So, it’s been a MASSIVE two months…