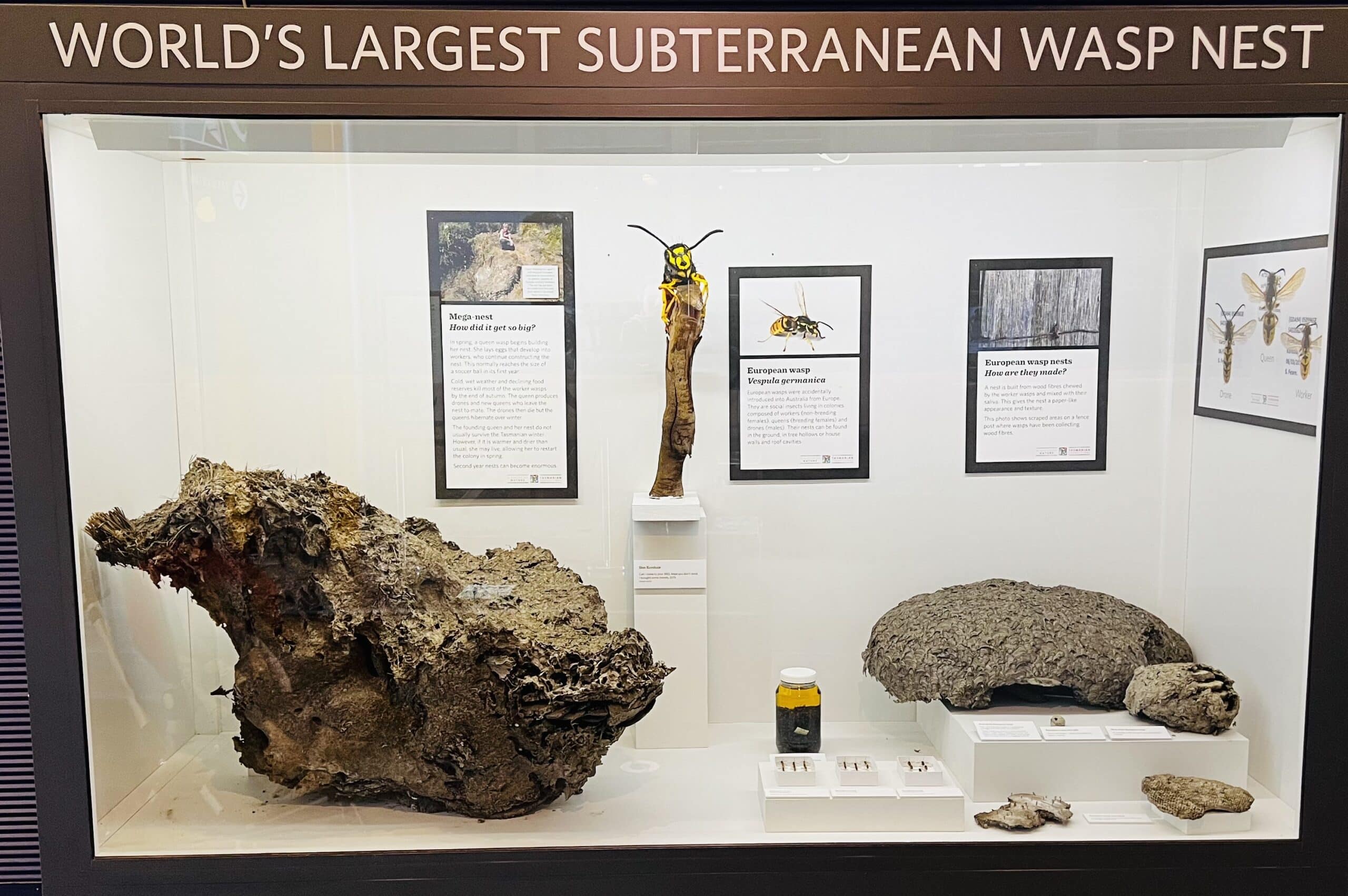 The European or German wasp (Vespula germanica) is native to Europe, northern Africa and
parts of Asia, but it is an aggressive coloniser and has become established in North America,
South America, South Africa, Australia and New Zealand. These social wasps fabricate
papery nests from chewed wood or plant fibres mixed with saliva and water. Most are located
underground, but they are also sometimes found in logs or trees, concealed in vegetation or in
artificial structures like roofs and wall cavities. In the wasps’ natural range, the old queens
die off in autumn, signalling the collapse of the colony and the disintegration of the nest, due
to a reduction in temperature and scarcity of food. New colonies are founded in spring by a
single fertilised queen, which has survived the winter by hibernating.
The European wasp is a highly efficient, opportunistic and indiscriminate predator and
scavenger, with a diverse diet. It will predate on a wide variety of insects and spiders and can
outcompete many other animals for food, posing a threat to indigenous wildlife wherever it
has been introduced. Known to kill pets and even livestock, the wasps will raid beehives for
honey and bees, and decimate fruit crops. This notorious species is a pest in most areas
outside its natural range but poses a much greater threat in milder climates such as those of
Australia and New Zealand, where some nests can survive into a second season, resulting in
massive colonies containing multiple egg-laying queens. In fact, the largest nests on record
were found on the sides of trees in New Zealand and exceeded five metres in length, with an
estimated weight of 450 kilograms. These giant nests may contain more than 100,000 wasps
and can have a profound effect upon local environments; in New Zealand the wasps have
been responsible for local extinctions, as well as completely altering food webs, particularly
in the beech forests of the South Island. By way of comparison, a typical first-year nest in
England is around the size of a soccer ball, with approximately 3,000 inhabitants; first-year
nests in Australia are often roughly double this size due to our relatively shorter, milder
winters.
European wasps were first detected in Tasmania in 1959 and rapidly became entrenched; they
were discovered in Melbourne in 1977 and quickly gained a reputation as a noxious pest
throughout southeast Australia. In Melbourne, these destructive insects have become an
increasingly troublesome domestic nuisance, especially during late summer and early
autumn. The wasps often nest in or near human habitation. They will scavenge upon garbage
and are powerfully attracted to meat, fruit and sugary drinks, which is why they are prone to
frequenting picnic and outdoor dining areas. European wasps possess a more aggressive
demeanour than bees and will vigorously defend their nest against anything that is perceived
to present a threat. They can sting repeatedly, causing swelling and an excruciating burning
sensation, whilst also releasing pheromones that encourage other wasps to join the fray.
These dangerous pests are infamous for sneaking inside unattended soft drink cans, making
them the ultimate unwanted barbecue guests!
So the destructive potential of a second-year nest containing close to 100,000 wasps is truly
frightening. In spring 2014, Simon Fearn, of the Queen Victoria Museum and Art Gallery in
Launceston, received intelligence regarding the potential presence of a wasp nest that had
survived the winter at Karoola, in Tasmania’s central north. This subsequently formed the
basis of an article in The Tasmanian Naturalist (2015) and another in Scales & Tails
magazine (2016). Simon decided not to immediately seek out the location of the nest,preferring to let it continue to develop to ascertain if it could attain truly monstrous
proportions!
By late summer, however, the calls for assistance could no longer be avoided as the wasps
were everywhere. Initial attempts to discover the nest site were unsuccessful, however, as
there were simply too many wasps flying around to work out where they were coming from.
Large numbers of wasps were visiting a dam about 300 metres away from the property, but
this turned out to be a red herring. Wasps require a reliable source of water to construct their
papery nests, and consequently the presence of the dam was strategically important for the
nest but did not provide any clues as to its actual location. After several weeks of fruitless
searching, the owners of the property offered their eleven-year-old son a $20 reward, and he
promptly discovered the nest site within fifteen minutes.
Late that afternoon, Simon was able to inspect the giant nest, which was located in a
blackberry-choked creek bed. A ‘dense and continuous plume of wasps’ was observed
leaving and returning to the nest, and there were six large entrance holes and several smaller
ones spread out over 1.5 metres of creek bed. Simon immediately realised that this was
probably a record-breaking nest, and that if he could recover it intact, it would make a
splendid exhibit for the Queen Victoria Museum and Art Gallery. However, although he was
able to approach quite close to the nest without invoking the ire of the insects, he knew that
any attempt to exterminate the wasps would be extremely dangerous and potentially fatal.
Careful planning would be critical.

Creatures of the Sun I have recently been thinking in depth about the magic and menace of summer. It is true that everything in life…

Environmental Beeswax Wraps: An Alternative to Plastic It might seem alarming (and it is) that the average Australian goes through more than 60 kilograms of…

Sweet Vietnam! Over the course of my life, I have done a great deal of travelling. There isn’t much I enjoy more than the experience…

Bees vs. Big Business. Neonicotinoids; an insidious threat. Part 1. Neonicotinoids are a family of insecticides that were developed in the 1980s and 1990s.They quickly…