Exotic bees and wasps in Melbourne and Australia.

Although Australia has over 1,500 species of native bees, the most familiar of these insects to residents is undoubtedly the exotic European Honey Bee or Western Honey Bee (Apis mellifera). This species is originally from Europe, Asia and Africa. It was introduced into North America in the early 1600s and has since spread throughout the Americas and evolved into a variety of races, 28 of which are recognised as separate subspecies.

The European Honey Bee was introduced to Australia in about 1822 to produce honey for the early settlers (some native bees also produce honey, but in limited quantities). In the early history of the colony, a large number of exotic species were deliberately released, some for no other reason than they provided a reminder of ‘home’. The Acclimatisation Society of Victoria actively imported and cultivated exotic species, and was responsible for the introduction of the Indian Mynah and other familiar exotic birds that are now pests. In fact, the Melbourne Zoo in Parkville was originally established to house the new arrivals imported by the Acclimatisation Society prior to their release into the wild.

Besides the production of honey, managed hives of European Honey Bees are vitally important in the pollination of crops around Australia, and the collective industry associated with honey bees in this country was estimated to be worth between $4-6 billion in 2008. The distribution and abundance of honey bees in Australia has increased dramatically over the last 80 years, and they are now found throughout the country, although least abundant, if not absent, in alpine areas and arid regions. European Honey Bees are also important pollinators of native wildflowers, and are known to visit the flowers of at least 200 Australian plant genera. Apis mellifera does not fight with native bees, however it is a superior forager than most indigenous species, and this has led to concern that feral populations may outcompete native bees, especially if resources are in short supply. The results of scientific investigation have so far proved inconclusive, with little or no impact demonstrated on native species.

The European Buff-tailed Bumblebee (Bombus terrestris) is a far more recent arrival to our shores, and was accidentally introduced to Tasmania in 1992. Within a decade, the bumblebees had been found to have spread across most of the island, including several remote national parks. Bumblebees can fly much further than many native species, and are active at much lower temperatures, and they could have a negative impact on native birds and plants, in addition to bees. Bumblebees are also specialist pollinators of many weeds that could become far more invasive and destructive if the bees proliferate and spread. Some Australian horticulturalists are keen to import bumblebees to the mainland to assist with pollination of crops, however this remains illegal.

In 2007, a third exotic species, the Asian Honey Bee (Apis cerana) was found in Cairns. Attempts to eradicate it have proved unsuccessful, and a containment program is now in effect. The potential impact of this species in Australia is unclear, however Asian Honey Bees are generalists and can act individually or as part of a colony, and this flexibility has enabled them to become highly successful invaders.

The European or German Wasp (Vespula germanica) is also a comparatively recent immigrant, having first been detected in Tasmania in 1959, where it quickly became established. A native of Europe, north Africa and parts of Asia, European Wasps were first recorded on mainland Australia in Melbourne in 1977. Spread of this species has been greatly assisted by human transportation, but distribution in Australia appears to be limited by climate. The wasps are currently found throughout most of Tasmania and Victoria, and in New South Wales, southeast Queensland, the region around Adelaide and parts of southwest Western Australia.

Prior to the arrival of the European Wasp, in approximately 1958 the English Wasp (Vespula vulgaris) was detected in Melbourne’s eastern suburbs. This species is closely related to the European Wasp and has a very similar appearance. Interestingly, this species has not enjoyed the same success in Australia, and remains limited to the eastern parts of Melbourne and Gippsland. 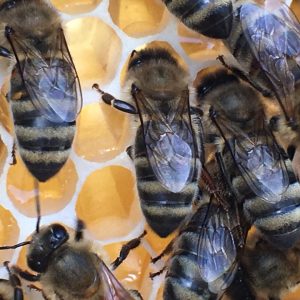 Beekeeping Toolkit: Part One Beekeeping is no longer just the activity of professional apiarists; it is a practice that can be enjoyed by anyone with…

Removing European Wasps from Your Home As their name suggests, European wasps are an introduced species in Australia. Spoiled by a lack of predators and…

Lesley’s Lesson As many of you know, I celebrated my birthday on the 27th February 2019. The big 4-1! I was completely overwhelmed with all…