Beeswax (or cera alba, from the latin and meaning ‘white wax’) may not be the first product that comes to mind when one thinks of bees, but it is arguably the most useful. Beeswax is normally associated with honey bees of the genus Apis, since this is the source of beeswax harvested by humans, but it is also made by bumblebees and the social species of Australian native bees.

Beeswax is derived from the sugars in honey, and bees must consume 6-9 times as much honey, by mass, to produce the wax. It has been estimated that the bees fly 530,000 kilometres to yield a single kilogram of wax! The wax is essential for the construction of the hexagonal (six-sided) cells that comprise the brood comb and honeycomb. These are used to house larvae and pupae, and to store honey, nectar and pollen. The accumulation of surplus honey, which is stored in cells capped with a layer of wax, enables the hive to survive winter, when it is not possible for the bees to forage for food.

The wax is secreted by worker bees from special glands on the sternites (ventral plates) of the abdomen. In summer, the worker bees’ lifespan is only about 35 days. They are most efficient at producing wax at an age of between 10-16 days, and after around 18 days, the glands gradually atrophy. Beeswax is formed in tiny flakes, or scales, about 1,100 of which are needed to make a gram of wax. The workers chew the wax scales, adding saliva, to make the wax more malleable. New wax is clear and colourless, but during mastication pollen oils and propolis is also incorporated, which causes the wax to become progressively more yellow or brown. Beeswax darkens in appearance with age and use and can range from yellow to orange, red and brownish-black.

Various esters form the major components of beeswax, which is highly flammable and melts at 62-66oC. It also becomes brittle if too cold; honey bees maintain their hives at a temperature of about 35oC, at which the texture of the wax is ideal for manipulation. Although edible, beeswax is of insignificant nutritional value to humans and other mammals, as it is largely indigestible.

Beekeepers extract honey by cutting the wax caps off the honeycomb using a knife or machine. The honeycomb itself is left intact and is usually returned to the hive, but can also be harvested for the wax. Wax from the brood comb is usually darker than that from the honeycomb, due to the accumulation of impurities and debris, and is clarified by a process of rendering. The residue, called slumgum, sticks to the bottom of the cake of wax. Slumgum is brown or black in colour and is utilised by apiarists as a powerful attractant for bees. It burns readily and can also be used to make crude fire starters, and as a fertiliser.

Beeswax can be softened to become more workable at room temperature with the addition of mineral oil or vegetable oil. It can also be treated with bleach or alcohol, however this results in the addition of potentially toxic chemicals, and therefore pure, natural beeswax is now normally preferred.

Humans have been using beeswax for a wide variety of purposes for thousands of years. The great advantages of this material are that it never goes bad, and that it can be heated and reused. Beeswax is commonly used as a protective coating for cheese, and as a glaze for fruit which assists in reducing water loss, as well as being an ingredient in the production of chewing gum.

Of course, beeswax has long been intimately associated with the manufacture of high quality candles, and it is also useful as a basic constituent to make soaps harder and last longer. Beeswax is increasingly being used in a variety of cosmetics, including hand creams, moisturisers, lip balm, eye shadow, eye liner and hair products. Other niche uses include: as a component of furniture polish and shoe polish; as a modelling material; to seal formal documents; as a surfboard wax; in the production of batik; and to control bleeding from bone during surgery.

Today, India is by far the world’s largest producer of beeswax. In Melbourne and Australia, pure and natural beeswax for a multitude of applications is best sourced direct from a professional beekeeper or apiarist. Look for a product that has already been rendered and strained. 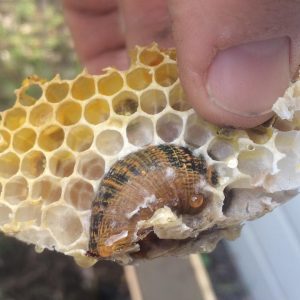 Honeycomb construction – a natural marvel. The familiar hexagonally-shaped wax cells that form the basis of honey bees’ nests are used to store honey and…

The Colour of Honey Part 3: As Red as Beetroot and as Black as Coal. Some honey is anything but honey coloured. ‘Red’ honey is…