The familiar hexagonally-shaped wax cells that form the basis of honey bees’ nests are used to store honey and pollen and to raise their larvae. Many wasps also utilise a hexagonal building block for their nests, which are made from a papery wood pulp. Honeycomb cells are always aligned at about 130 from the horizontal to prevent honey from dripping out. A similar naturally-occurring honeycomb structure also exists in bone, cork and tripe.

Honey bees consume over eight kilograms of honey to manufacture a single kilogram of wax, so it makes sense that this material should be used as efficiently as possible. In fact, the hexagonal structure minimises the perimeter of the cells, using the least amount of material possible to create a given volume of lattice. The ends of the cells have a trihedral composition (i.e. in three planes) that is incredibly efficient at minimising surface area, while the layers of honeycomb fit into each other in a slightly offset configuration that also optimises the amount of wax required, and at the same time delivers enhanced strength. In addition, the honeycomb structure provides excellent rigidity with minimal density, and offers a high degree of compressive strength.

The honeycomb design used by bees has long fascinated mankind. As early as 36 BC, the Roman scholar Marcus Varro reported that Greek geometricians had determined that the hexagonal shape makes the most efficient use of space and materials. The dome of the Pantheon, rebuilt in 126 AD, features a honeycomb structure. In 1638, Galileo noted that nature often made use of hollow solids (for example, in the bones of birds and the stalks of plants) in order to minimise weight without sacrificing strength. Later, in 1859, Charles Darwin was to observe that the construction of the honey bees’ nest was, ‘absolutely perfect in economizing labour and wax’.

In the late 19th century, the widespread commercial applications of the honeycomb design began to become apparent, due to inherent minimisation of weight and material cost, and retention of strength and rigidity. In 1915, German engineer Hugo Junkers pioneered an all-metal design for aircraft incorporating honeycomb core. Today, manmade honeycomb structures are commonly used for structural purposes wherever flat or slightly curved surfaces are required. The geometry may vary substantially, but the basic features and properties are the same. Often composites are used, in which the honeycomb is sandwiched between two thin layers of material.

Honeycomb materials remain of integral importance to the aerospace industry, and are used in the manufacture of aircraft and rockets. In 1969, fire-resistant honeycomb material was incorporated into the design of the Boeing 747.

Honeycombs are essential in many other fields, including packaging, logistics, furniture, audio equipment and automotive construction. Honeycomb mesh is often used to reduce wind turbulence, and is standard on the front grilles of automobiles. A honeycomb composite is also used to produce sporting goods such as skis and snowboards.

All this from the humble honey bee! 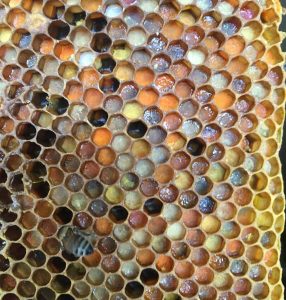