It has been estimated that there are more than 100,000 described species of wasps found throughout the globe, excepting polar regions. Some familiar species are social, while many are solitary hunters, parasitising other insects, which makes them valuable in the control of pests. In Australia alone there are more than 12,000 species of native wasps, ranging from the fig wasps, which have a symbiotic relationship to fig trees, to cuckoo wasps, which parasitise other wasp species.

Incredibly, the world’s smallest known insect, measuring a tiny 0.139mm in length, and the world’s smallest flying insect, at just 0.15mm, are both fairy wasps of the family Mymaridae (some species in the related family Trichogrammatidae also do not exceed 0.2mm). Males of the very smallest species, Dicopomorpha echmepterygis, from Costa Rica, are even smaller than some single-celled organisms, and to put that into perspective, they are about a quarter of the width of this full stop. There are more than 1,400 species of these minute and relatively primitive creatures, which average only 0.5-1.0mm in length. Described by Irish entomologist Alexander Haliday, who named the family in 1833, as ‘the very atoms of the order Hymenoptera’, they are common in tropical and temperate regions, with the greatest diversity being found in South America, New Zealand, and Australia. Fairy wasps are known to inhabit a variety of environments, with some species being aquatic; they are usually solitary and their lifespan may be as short as 1-2 days. All parasitise the eggs of other insects, and considerable success has been achieved using fairy wasp species as biological control agents for various insect pests. In Australia, fairy wasps are being investigated as a possible means of controlling gall-forming crop pests.

The Giant Scoliid Wasp (Magascolia procer) of Indonesia is a serious contender for the largest wasp in the world. These solitary wasps parasitise the Atlas Beetle; they have a wingspan up to 11.5cm and can measure 7.7cm in length.

The largest social wasp is the Asian Giant Hornet (Vespa mandarinia). Workers generally grow to about 5cm long, with a wingspan of about 7.6cm, whereas queens may exceed 10cm in length. These voracious predators possess a potent venom which causes excruciating pain and contains a neurotoxin that can be lethal to humans. They are common in Japan, where they are responsible for around 30-40 fatalities every year. Asian Giant Hornets hunt down insects, including mantids, bees and other hornets. They can fly up to 100 kilometres in search of food, at speeds of up to 40kmh, and a small number of hornets can exterminate an entire colony of thousands of bees in a matter of just a few hours. Although bereft of natural defences, the Japanese Honey Bee has developed an amazing strategy to combat the hornets. Upon detection of a hornet scout, it is engulfed by a ball of hundreds of the bees, which vibrate their flight muscles vigorously. The hornet eventually succumbs to the increased heat and carbon dioxide concentrations, preventing it from alerting the rest of the hornet colony to the presence of the bees. Research suggests that sometimes conflict costly to both species is avoided when the bees warn off hornet scouts with signals that they have been recognised.  Adult hornets cannot digest solid protein; they chew prey into a pulp to feed to feed their larvae, which then produce a mixture of amino acids to be consumed by the adults. A synthetic version of this ‘hornet juice’ is now being marketed as a supplement capable of improving human endurance.

Australia’s largest wasp is the solitary cicada-killer wasp, Exeirus lateritius, which attains a length of 4cm. This species is found throughout the country and hunts over 200 species of cicada, which it paralyses high in the canopy and then carries to its underground nest, where an egg is laid on its victim. Sometimes the wasp will return to the exact location it found its prey to feed on the sap that exudes from the hole in the tree made by the cicada. Although capable of inflicting a painful sting, E. lateritius is not aggressive towards humans.

Spider wasps of the family Pompilidae may grow up to 3.5cm in length. They are likewise found across Australia and are solitary predators which target spiders as large as a huntsman or funnel-web. They have been observed to trim the legs from spiders to make them easier to manoeuvre, and some species are equipped with special scales that enable them to walk on spiders’ webs and creep up on their prey. Spider wasps are also unlikely to bother humans.

Australian native wasps are generally harmless, whereas the European Wasp is a serious pest in the suburbs of Melbourne.  Contact an experienced beekeeper or apiarist for positive identification and effective control and removal. 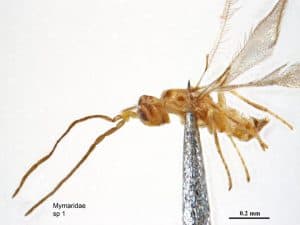 Pest Control Melbourne The A to Z of Pests in Melbourne. Part 3. In this instalment of our continuing series of articles about pests in…

Bees and Eucalypts Part 1: An Iconic Aussie. Eucalypts are perhaps the defining characteristic of the Australian landscape. An ever-present and immediately recognisable cornerstone of…