Swarming is a natural part of the lifecycle of honey bees. This allows a hive to reproduce and to colonise new territory and take advantage of abundant sources of food. Swarming normally occurs in warm weather during spring; in Melbourne this is typically between September and December, although on rare occasions honey bees will swarm at other times of the year.

In preparation for swarming, the queen bee lays eggs into special ‘queen cups’ created by the workers. New virgin queens will emerge from these cells, enabling the colony to split.

The honey bee swarm consists of the old queen together with approximately half of the worker bees. The workers will stop feeding the queen prior to swarming, otherwise she is simply too heavy to fly any distance! Scouts will seek out a nearby location where the swarm can cluster temporarily. In Melbourne’s urban environment, this often consists of a fence post, the branch of a tree, or other familiar object. From there, the scouts will search for a suitable permanent home for the new colony.

Scouts communicate their level of excitement about a prospective home site via a dance. When the majority of scouts have agreed upon a location, the swarm will move a second time. European Honeybees commonly prefer a sheltered, darkened space in which to build their nest, but in Melbourne’s relatively mild weather, they may choose an exposed position. The new home may be more than a kilometre from the original hive, or it may just be in the next street.

Sometimes, when agreement cannot be reached upon a suitable site within a few days, the temporary camp can become the permanent home for the new hive by default. Swarming puts the bees at considerable risk, as they leave their original hive with no provisions other than the nectar in their stomachs. Swarms can face starvation, particularly if the weather changes dramatically – and Melbourne residents are very familiar with this phenomenon!

The tendency to swarm differs between the various types of honey bees. In Melbourne it is the European Honeybee that is most often encountered. Honey bees are generally not inclined to be aggressive when swarming, but will defend themselves vigorously if required. If you find a swarm on your property, you should take some simple precautions: do not aggravate the bees or attempt to remove the swarm in any way; avoid the immediate vicinity of the swarm; keep children and pets away; and ensure that you use appropriate footwear outdoors, in case you step on a bee.

Lastly, you should contact an experienced beekeeper, or apiarist, as soon as possible. It is a relatively simple matter for an experienced person to remove and relocate a swarm from a temporary encampment. Once the bees have chosen a permanent home, however, this can become far more difficult – especially since European Honeybees often display a preference for wall cavities.

Fortunately, in Melbourne an experienced beekeeper can usually be found to safely relocate the swarm within 24 hours, with minimal disruption and no harm to the bees themselves. 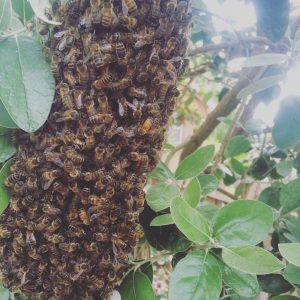 Buy or Rent: Bees for Almond Production Recently, we took a look at why bees are so vital for the production of almonds, not just…

Moving Bee Hives Safely in Melbourne So, like me, you are the keeper of an unusual pet: the bee. Unlike the family dog or cat…

Going that Extra Mile: Tasmanian Leatherwood Honey I love honey with a little extra punch. Honey that heals, honey that fixes a cold, honey that…